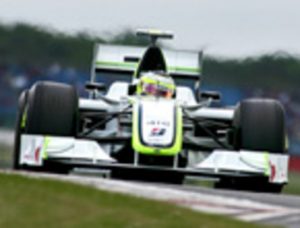 Silverstone the home of British motor sports not only offer the British Formula 1 but also Moto GP and Super bikes, along with many other events throughout the year.

Silverstone was opened as a World War Two airfield in 1943, near the leafy village of the same name. Once the war had ended in 1945 Britain was left with a number of redundant airfields but without a major race track Donington Park was still a military vehicle storage depot, Brooklands had been sold off, Crystal Palace was in a state of disrepair and Brands Hatch was still under-developed. The Royal Automobile Club was interested in Silverstone as a potential 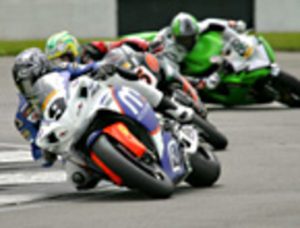 site and approached the Air Ministry in 1948 and a lease was arranged. At this time the centre of Silverstone Circuit was a farm producing cereal crops and also a piggery so the RAC employed farmer James Wilson Brown to create the first Grand Prix circuit at the site and gave him just two months to build it.

On October 2nd, 1948, amid straw bales and ropes, Silverstone’s first event took place, the RAC Grand Prix. The crowds came in there thousands, thrilled to see the return of Grand Prix racing after so many years of war austerity.

The 3.67 mile course sent the 23 competing cars racing round part of the 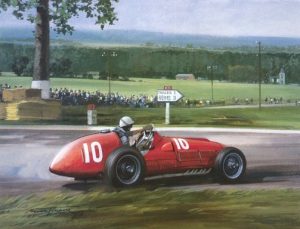 perimeter track, up the two former runways and back to the perimeter. This layout meant cars were racing towards each other head-on until they turned sharp left and returned to the perimeter. For this reason canvas screens were erected across the centre of the circuit to stop the drivers being distracted whilst the spectators were not allowed in the centre of the circuit because of the potential damage to growing crops. The winner of the inaugural race at the Silverstone circuit was Luigi Villoresi in a Maserati, who recorded an average speed of 72 mph to claim the first prize of £500. A year later, after the hazardous runways were eliminated and a chicane was inserted at Club on the full perimeter road, Silverstone hosted a second major event in May 1949 – the Formula One Daily Express International Trophy – virtually a second Grand Prix, won by Alberto Ascari.

Another of Silverstone’s most famous classics also began in August 1949, the Daily Express International Trophy for Formula One cars and for this meeting the Club chicane was dispensed with and the circuit took up a shape that was to last for a quarter of a century.

Blenheim Palace and formal gardens are now closed for the winter and will re-open on 13th February 2010. The Park is open daily for walks.

Blenheim Palace is home to the 11th Duke and Duchess of Marlborough and the birthplace of Sir Winston Churchill.

Set in 2100 acres of beautiful parkland landscaped by “Capability” Brown, the magnificent Palace is surrounded by sweeping lawns, award-winning formal gardens and the great Lake, offering a unforgettable day out for all.

Blenheim Palace is a unique example of English Baroque architecture. Inside, the scale of the Palace is beautifully balanced by the intricate detail and delicacy of the carvings, the hand painted ceilings and the amazing porcelain collections, tapestries and paintings displayed in each room. On the first floor ‘Blenheim Palace: The Untold Story’ brings to life enticing tales from the last 300 years.

Situated in Woodstock, just 8 miles from Oxford, the Palace was created a World Heritage site in 1987.

We look forward to welcoming you to Britain’s Greatest Palace very soon.

Four generations of my family have shaped and enhanced this house, each adding a personal element, whether Ferdinand’s colourful exotic birds, Miss Alice’s rigorous housekeeping rules or our contemporary carpet bedding. The generous act of my cousin Jimmy in offering Waddesdon Manor to the National Trust ensured the preservation of the house and its contents in perpetuity. His widow, my cousin Dollie, became the first Chairwoman of the Waddesdon Management Committee and she lovingly devoted herself to opening the property, as a unique expression of Rothschild style, to an ever growing public.

One hundred and thirty years ago this house and its setting were created to delight and surprise the small circle of Baron Ferdinand’s friends. More than 300,000 visitors a year now come to Waddesdon to appreciate the exceptional art collections, discover the diverse moods of the gardens, taste wine, or attend a study day. I only hope that you will be as delighted by Waddesdon as I have been over many years.
Lord Rothschild

Splendid 18th-century English interiors in an idyllic country setting, Georgian country house, with fine Chinoiserie and rococo decorations, intricate wood carvings and spectacular parquetry staircase and mementoes of Florence Nightingale, who was once a regular visitor. 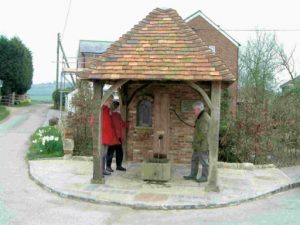 The Schorne Well is an ancient water source that has been an ancient pilgrimage site and North Marston tourist attraction for many centuries. In 2004/2005, the well was restored to its current fine form. Below are some pictures celebrating that renewal, and on the right Alison Finnemore’s poem captures the history of the Well.

The History of John Schorne’s Well
My well is seven centuries old
The water, still, is clear and cold.
I found it in a year of drought
When Marston folk, to drink, had nowt

It happened, as I chanced to pass,
I struck my staff upon the grass
Clear water gushed out at my feet
A miracle! And on our street
Cried all the thirsty people there
They drank, then offered up a prayer
Pilgrims came from far and near
To cure their ills with water clear
And worship at my Holy shrine
Up in St. Mary’s Church so fine
The well, at over five feet square,
Was always open to the air
Over the top a building stood
Built with stone and bricks and wood
Four stone steps inside descending
For drawing water without bending
(All these features in plan marked out
By your feet, or thereabout
The depth was almost seven feet
Oh, what a pity it was so deep! 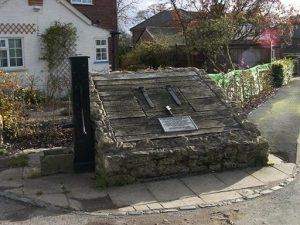 In July 1861 disaster came
When Catherine Watson (also known as Jane
Slipped and fell into the water
Watched in horror by her daughter
Little Sarah, aged just three
Called for her sister desperately
Her older sister came running round
Sadly to find their mother drowned
“Accidental drowning,” Mr Parrott, the coroner, said
“For safety’s sake, secure that shed”
A barred door and lock were at once applied
And a pump placed on the north-east side
The building fell into disrepair
And by 1900 was no longer there
Only the pump still stood with pride
A stone (with ring) marked the well beside.
In ’70 and ’90 the well was improved
But its former glory remained subdued
Everything stayed as before
Until one day in 2004
In October work did start
Using all the craftsman’s art
With axe and adze and English oak
A frame was made (it was bespoke)
Tudor bricks with lime and sand
Old peg tiles, cut by hand
Old York stone and blue brick
(Some were thin and some were thick)
For the pump, a new oak case
Re-erected in centre place
A stone trough, re-cycled, too
Holds the water pumped by you
In 2005 the work was done 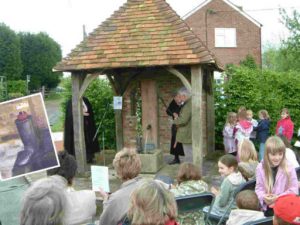 Relief was felt by everyone
My historic well, was, in simple way
Opened and blessed on 21st May
Now my well is, as of old
A thing of beauty to behold

If my image you would see
Look behind you, for there I be
I hold a boot beneath my arm
Into which, the Devil, I did charm
And now that he’s imprisoned there
Peace dwells in the village and elsewhere.