With the B&B situated just off The Swan’s Way, it makes an ideal overnight stay for both horse and rider. The paddock is available without charge and should stabling be required then this can be arranged with at least 2 weeks prior notice and a small charge to cover bedding and feed.

The Swan’s Way long distance bridle route runs from Salcey Forest in the north to Goring on Thames in the south, through varied countryside from beech woods on chalk scarp to low vales and ancient woodlands, a distance of 65 miles (105km). It is used to form the Buckinghamshire section of the Midshires Way. The Swan’s Way joins the western ends of the Icknield Way and the Three Shires Way. It connects these to the southern end of the Sabrina Way. The swan’s way

The North Bucks Way was set up by the Ramblers Association in 1972. It is approximately 35 miles long and can be completed in two full days walking or in a number of shorter sections connecting up with public transport. In the south, the long distance path starts at the Ridgeway, on the wooded scarp slope of the Chilterns, near Wendover. It soon comes down into the Vale of Aylesbury and passes near historic houses at Hartwell, Eythrope, and Waddesdon, each of which, with its park, has made its own mark on the landscape. Quainton Hill, with panoramic views, marks the approximate half way point and then attractive North Bucks villages alternate with peaceful countryside. Finally, the new city of Milton Keynes is entered, but the emphasis is still of walking without traffic, first on ‘Redway’ paths and then beside the Grand Union Canal. The North Bucks Way ends at the county boundary with Northamptonshire.  Pear tree B and B is just off the half way point and easly accessable from the main path route. North Bucks Way

Matthews Way is a circular walk of about six miles between the villages of North Marston and Quainton, made up of public footpaths that have been dedicated, waymarked and planted in memory of Matthew Lane, who died in 1996 just before his first birthday. Matthews Way 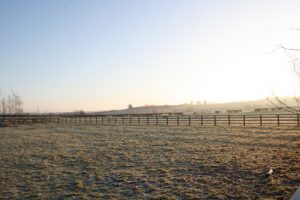